When Ted McNabola graduated from law school, his mentor gave him a dusty old book handed down from attorney to attorney since 1954. “He gave me a book called ‘The Art of Advocacy’ and wrote a note inside the book. When I opened the book, I saw that his mentor had written a note to him. And someone else had written to him,” says McNabola, now a partner at McNabola Law Group, P.C. Being the fourth lawyer to own the book and the third to get it as a gift was a powerful message for the recent graduate. “It was fantastic,” he says. “That was 20 years ago, but it did underscore for me the importance of those who went before me as trial attorneys and the fact we’re all standing on the shoulders of giants, if that’s not too corny.” McNabola, 46, of Chicago, has taken the lessons of “those who went before” to heart, not only through his passion for legal history, through his frequent publications on trial advocacy, and through his work with the Society of Trial Attorneys, but by helping teach and mentor the next generation of lawyers. As a plaintiff’s attorney, McNabola has had a remarkable success rate. About 97 percent of the cases he accepts result in a successful settlement or verdict, he says. His last four cases that went to trial resulted in jury verdicts totaling nearly $20 million. There were no settlement offers by the defense in any of those four cases. But a solid success record is secondary to helping injured people fight back, say those who know him best. “He genuinely cares about people. It’s not a business for him,” says McNabola Law Group partner Karen McNulty Enright, who has known McNabola since they studied for the bar together. “It’s ‘How can I help this person?’” Even his opponents praise McNabola’s diligence and ability to reach a jury. “He’s really committed to being exquisitely prepared,” says defense attorney David Hall, a senior partner with Hall, Prangle & Schoonveld, LLC. McNabola is an attorney who stays at the top of his field through constant development, both through research and by watching his peers at work. 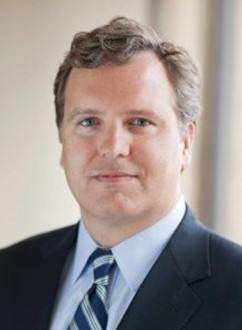 Playing Hooky to Watch a Master

Discovering He Was on Wrong Side

After law school, he went to work for Cogan & McNabola P.C., the predecessor firm to McNabola Law Group. A few years later, he accepted a position with a prominent defense firm. “After a few years as a defense attorney, I just didn’t feel my heart was in it,” McNabola says. “I didn’t feel good getting out of bed in the morning to save Big Business a few bucks.” The firm started giving him their rare plaintiffs’ cases, but he no longer wanted to be on the defense side at all. But he still had faith in the jury system, calling it “the most powerful engine against wrongful conduct.” He returned to Cogan & McNabola to take on plaintiff work full-time. He has never regretted the move. “The look in the eyes of your client when the verdict is read by the jury in their favor is beyond words,” he says. “It leaves an indelible mark in your mind because they often come to you at the lowest point in their life, really just looking for answers.” To his surprise, he found his work on defense made him a better plaintiff’s attorney. “I think doing defense work gave me unique insight into how the defense bar works and how insurance companies analyze cases,” he says. His clients soon saw the perks of McNabola’s experience on the other side. “For me, right away it was a huge benefit having somebody who knew how these guys would argue and what they would argue and what they were going to say,” says former client Scott Lawrence. “He was cool under pressure. He never got rattled.” Friends, clients, and even opponents describe McNabola’s style in a courtroom as confident, affable, and, above all, trustworthy. “When you go to trial, the jury often looks at the lawyers on both sides and thinks, ‘These guys are trying to fool me somehow,’” says defense attorney Michael J. Hennig, senior partner at Cassiday Schade LLP. “Unlike many of my opponents, they don’t think he’s trying to fool them. He’s trying to explain something to them.” Enright says McNabola makes a special effort to relate to his clients on a personal level. “He really takes the time to get to know them and gets to know their families and visits with them and remembers their birthdays and remembers specific events in their lives. He becomes aware of the pain and hardships our clients have,” Enright says. Lawrence says McNabola’s openness and honesty won him and his family over when they were considering hiring him. “He was very good at explaining things to my wife until she was comfortable that someone finally had our interests at heart and wasn’t looking just to get done with this job and move on to the next job,” Lawrence says. Defense attorney Hall says he always admires McNabola’s work ethic. “He is the kind of lawyer that will turn over every single stone, and then some, in building the best case for his client,” Hall says. Throughout his career, McNabola has given credit to the lawyers he’s learned from, including the mentor who passed on “The Art of Advocacy” to him, “the giants of the bar” like Rehnquist, and his brother, Mark, seven years older and a constant resource during law school. “It really made my learning curve shorter to have a brother to call,” the younger McNabola says,laughing. Now it’s his turn to pass his knowledge onto the next generation of law. For the last several years, he has been part of a mentorship program through Loyola’s School of Law. Every year, two to three second-year student meet regularly with McNabola for coffee, lunch, and advice. “Sometimes they’ll come to court with me,” he says. “I might introduce them to some judges because I think it’s helpful for them to go behind the bench and meet the judges.” He taught trial practice for seven years at Northwestern University’s School of Law before cutting back when his daughter was born. He still assists now and again with trial practice classes for Loyola.

His work with Northwestern also brought McNabola another unexpected dividend — a family. While assisting with a mock trial, McNabola slipped away to Chicago’s Michigan Avenue shopping district during a break to buy some dress shoes. He met a woman, got her number, called it, and didn’t hear from her for several months. “It was a very wonderful turn of events that she found my number and called me out of the blue a few months later,” he says. That was eight years ago. The woman he met over Cole Haan shoes is now his wife, Katherine, 31, and the mother of his young daughter, Maggie, now 2. A second daughter, Claire, was born in May. The family lives in Chicago’s Wrigleyville neighborhood. Throughout his career as a trial attorney, educator, mentor, husband, and father, Ted McNabola always keeps in mind the book his mentor passed on to him. “The underlying message in the book is that trial attorneys have an obligation to society as a whole to do our best to find the truth,” McNabola says. “On the plaintiff’s side, it’s to give a voice to those who don’t have a voice.”